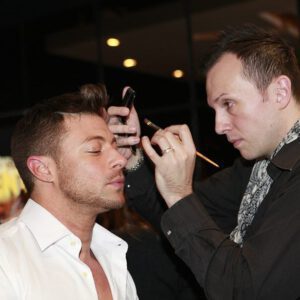 He is a specialist in Prosthetics, SFX, Historical, Character and Theatrical Makeup. He started his career in Theatre & Fashion but his talent and passion sent him towards specialist makeup.

He is the Seventa Makeup Academy SFX Department Head and also teaches & demos Media, SFX and Prosthetics to Degree, BTEC and City & Guilds levels (III, IV & V) at various colleges in the UK.

Ian frequently demos at trade shows such as IMATS & UMAE. He has demoed for various brands including Tilt and Mehron UK.

Ian is also a brand Ambassador for Mehron UK, a branch of Mehron Inc. He is sponsored by Mehron & Ben Nye through Treasure House of Makeup.